This June, we proudly celebrate Black Music Appreciation Month by honoring the incredible impact that African American music has had – and continues to have – on our country’s history.

President Jimmy Carter first designated June as Black Music Month in 1979. He established this national observance “to celebrate the African American musical influences that comprise an essential part of our nation’s treasured cultural heritage.” However, a presidential proclamation was not officially signed until 2000. In 2009, President Barack Obama renamed the celebration from Black Music Month to African American Music Appreciation Month. (On May 31, 2022, President Joe Biden officially recognized it as Black Music Appreciation Month.)

For the entire month of June, we pay homage to the singers, composers, songwriters, and musical artists who have shaped American culture. These African American musicians have gone on to create and contribute to styles such as rhythm and blues, hip-hop, pop, jazz, rock, folk, and gospel.

African-American Music Appreciation Month also coincides with Juneteenth, the longest-running African American holiday. Juneteenth marks the end of slavery in the United States. On June 19, 1865 (two and a half years after President Lincoln signed the Emancipation Proclamation), federal solders arrived in Galveston, Texas to announce that enslaved people were now free.

Juneteenth officially became a federal holiday on June 17, 2021. This year, it will be observed on Sunday, June 19 and Monday, June 20. 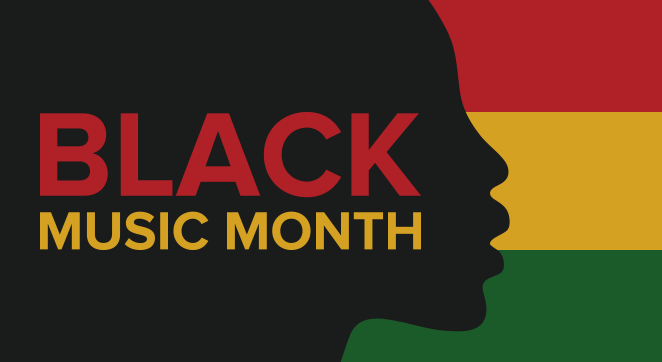 Listening to music (especially upbeat music) can take your mind off of stressors and help you feel more optimistic. “An uplifting song can also bring the benefits of positive affect, which can empower you to notice more opportunities and seize them when you can," writes Elizabeth Scott, PhD. "Some happy songs practically force you to dance to them, and this type of exercise can be great for stress management, too!

Source: Music as a Health and Relaxation Aid

Join HR & Payroll in celebrating Black Music Appreciation Month! Check out which song each of our directors submitted as their favorite song by a Black artist.

Thanks to all those who participated!